Today's Beekman Arboretum was originally a part of the lands of pioneer banker C.C. Beekman, whose historic home is just to the north. Beekman's barn and vegetable garden occupied part of this site. The Arboretum is also the beginning of the one-mile Beekman Canyon hiking trail. The first trail in the Woodlands trail system was forged here as an Eagle Scout project by young Matt Patton, who had gained an appreciation of this area from his teacher, Larry Smith. The trail was ¼ mile in length and is now the lower right-hand portion of the Beekman Loop Trail.

About 1993, the Jacksonville Woodlands Association identified the property as part of its ambitious goal of preserving open space in and around Jacksonville. The barn had long vanished and the area had become a garden waste deposit site. Around 1994, British-born landscape architect Alan Horobin joined the Woodlands' Board and lobbied to create a native plant arboretum on the  site.

The initial construction involved creating a meandering streambed to carry the seasonal runoff from the woods above, a small waterfall, a bridge, and a basic watering system for the plants to be featured in the arboretum.

Horobin insisted that nothing be planted that was not native to this area of Oregon, disdaining the likes of Peter Britt's sequoia tree. He often foraged nearby forests to gather specimens, arriving at weekly work sessions attended by his devoted band of volunteers, the bed of his battered pickup truck full of treasures to be planted.

Since the arboretum suffers Jacksonville's hard, red soil, plant survival rate was low. This despite the volunteers extending the drip watering system throughout the arboretum, creating a spidery web of buried, future leaks. However, emphasis on hiking trails and other properties conspired with Alan's deteriorating health, and the Arboretum, neglected, fell into disrepair.

A new crop of volunteers, headed by Parks Committee Chair Kandee McClain and Becka Kem, both Jacksonville Woodlands board members, undertook the Arboretum's restoration in 2016. With a cadre of volunteers and some skilled City workers, the waterfall was restored and vastly improved, surrounded by new plantings. A pollinator garden was begun where weeds once flourished. Surviving specimens were pruned, watered and encouraged and weeds attacked. With some monetary and volunteer help from the Woodlands and Boosters, a tool shed was tucked into a corner to facilitate work on site.

Early 2018 saw the completion of a new shelter above the waterfall and enhanced rockwork around it. Going forward, plans include continued repair of the convoluted water web and the systematic replanting of the area. The streambed will be cleaned and restored and new signage for specimen plants installed. Work parties have begun and will continue 'til fall and volunteers of all skill levels are heartily encouraged to attend. 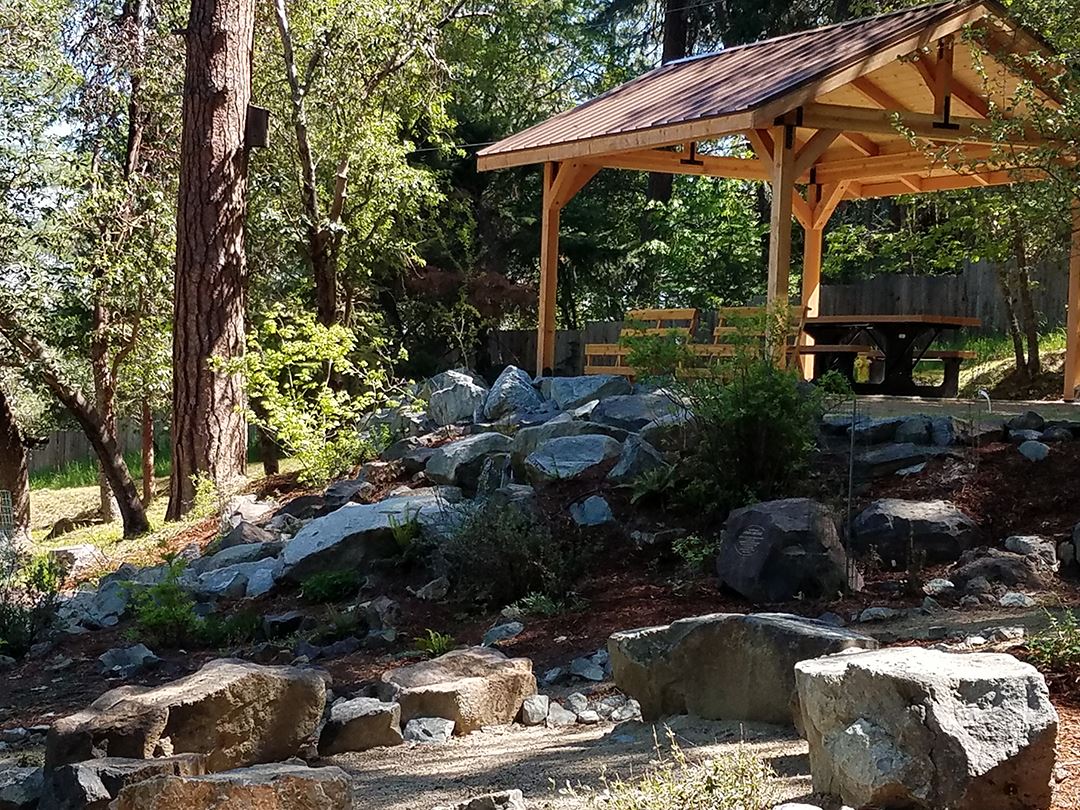