Create an Account - Increase your productivity, customize your experience, and engage in information you care about.

History of the Order

The Independent Order of Odd Fellows is a secret fraternal, benefit society, founded in England sometime during the second quarter of the 18th century. The Lodge was formed in Jacksonville in the 1850s. by 1860 the Odd Fellows Lodge had built a brick building, which was used as a synagogue, for the Jewish citizens, and was rented by the Masons until they built their building in the 1870s.

A grand lodge of Odd Fellows for England was formed at London in 1803. In 1809 a subordinate lodge at Manchester successfully declared itself independent of the grand lodge, and, as the Independent Order of Odd Fellows, Manchester Unity, constitutes today the largest English branch of the order.

Thomas Wildey is considered to have been the founder of the society in America, although other lodges are known to have existed before Wildey came to the United States. In 1819, Wildey and other English associates (John Welch, John Duncan, John Cheatham, and Richard Rushworth) organized a lodge of Odd Fellows at Baltimore, which received a charter from the Manchester Unity. In 1843 the American order declared its independence of the older society after Manchester Unity recognized the Grand United Order of Odd Fellows, which was founded in that year by Peter Ogden, an African American sailor. 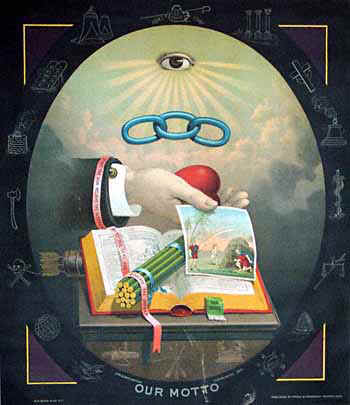 The description of this society by Stanley J Bransgrove is an excellent discussion of the IOOF Independent Order of the Odd Fellows. The roll of Fraternal Organizations in Marin County of California was similar to the social structures of Jacksonville Oregon.

For an excellent explanation go to the mill valley website. The material is the copyright of Stanley Bransgrove.

See also Toward a Fraternal History of Marin County: A Survey of Secret Societies being a General History of Various fraternities and Their Specific Impact in Marin Co Ca by Stanley J. Bransgrove, P.M., M.R.S., F.G.C.R.